There have been many “great” waves in economy, especially in the US: the Great Depression (1929–1933), the Great Inflation (1965–1982), the Great Moderation (mid 1980s–2007), the Great Recession (late 2007–2009), and now we have a new one: the Great Resignation. But while the previous “great” events were undoubtedly real and had far-reaching impact on the economy and the labor market, this time round, there is reasonable doubt as to whether this wave of quits really is so great. Despite the huge buzz this catchy term has generated in the media – which is often based on shaky data promoted by data providers whose main interest is self-marketing.

The Great Resignation, a term allegedly coined by Anthony Klotz of Texas A&M University, was originally a prediction. Back in May 2021, Klotz anticipated a rise in quits based on pent-up resignations that hadn’t happened since early 2020 due to the significant job uncertainty brought on by the pandemic. He claimed that these numbers would be multiplied by “pandemic-related epiphanies” about family time, remote work, life and death and so on. Now that the quits numbers really have gone up, his prediction seems to have been turned into a prophecy, with the widespread consensus that it is happening for all the reasons Klotz stated. But there are good reasons to take a more critical view on this thesis, the most pertinent being the glaring lack of reliable evidence to support it.

In October 2020, 4.2m workers in the US quit their jobs, which is almost 3% of total employed workers. Viewed as an isolated number, this quits rate has indeed risen significantly over the last 12 months. However, the job openings rate has also increased dramatically to 7% of total employment plus new openings. This 60% increase from pre-pandemic levels far exceeds the numbers of the past two decades. Accordingly, the hires rate increased to a level last seen 20 years ago. If we put the quits into this context, say, by considering the ratios of quits to job openings, the situation looks far less dramatic. 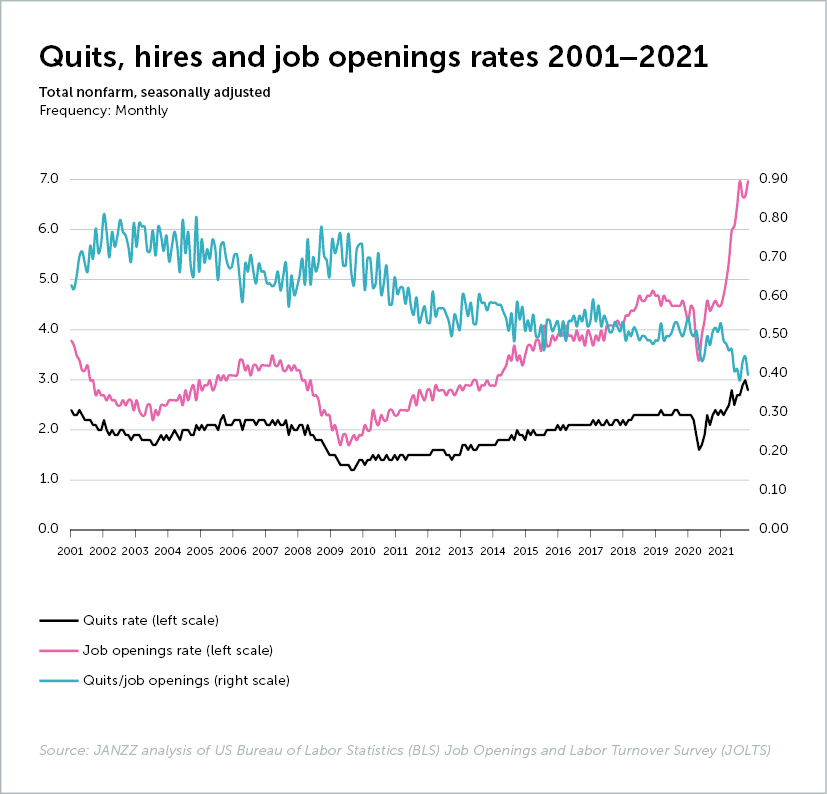 It certainly makes sense to view these values together, since quits are strongly correlated with job openings: For the available monthly data from 2000 through 2021, the correlation coefficient is 0.82 – higher than for quits with unemployment (-0.77) or hires (0.75). And in relation to job openings, the current quit rate is by no means an outlier. Both the current rates of job openings and of quits are higher than usual, straying away from the typical cluster as shown in the figure below. And yet, their relationship still follows the same pattern as before the pandemic, when these changes could not have been attributed to, say, a desire for life changes newly discovered in lockdown. It thus seems more likely that quits have risen primarily for the more mundane reason that an unusually high number of job opportunities are opening up to workers, i.e., quits are simply at the level we would expect them to be, given the number of job openings. As Josh Bersin put it: Right now, there are just too many jobs and not enough people. And so we are likely seeing a great job hop as opposed to a great resignation. But it is not necessarily about doing something new. 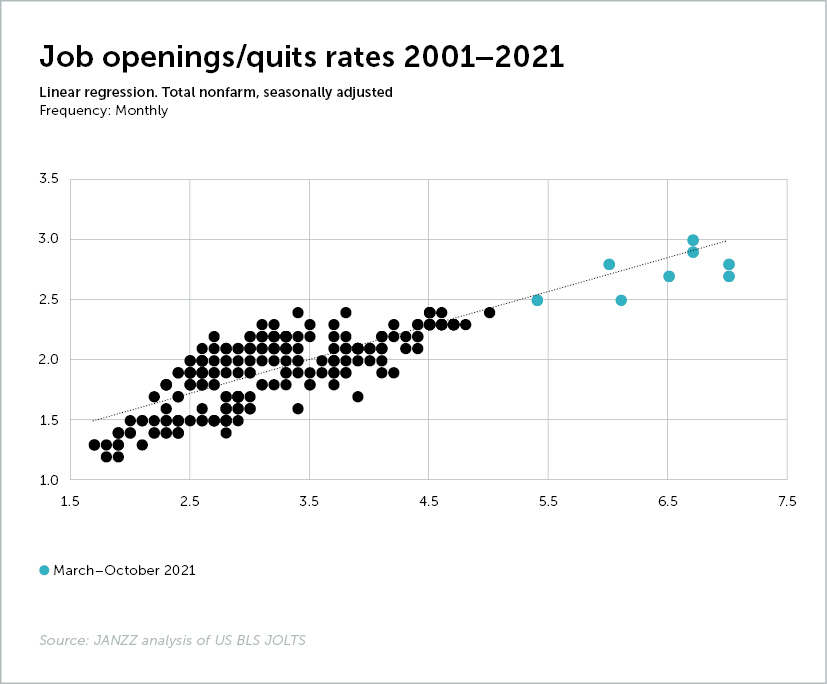 Looking at the figures in more detail, we see that of the four (sub)industries most affected by quits, three belong to the by far lowest paying industries: Retail Trade and Leisure and Hospitality. The latter was also the group that experienced exorbitantly high layoff rates at the beginning of the pandemic, and many front-line workers in retail were forced to work under precarious conditions with little to no monetary reward. 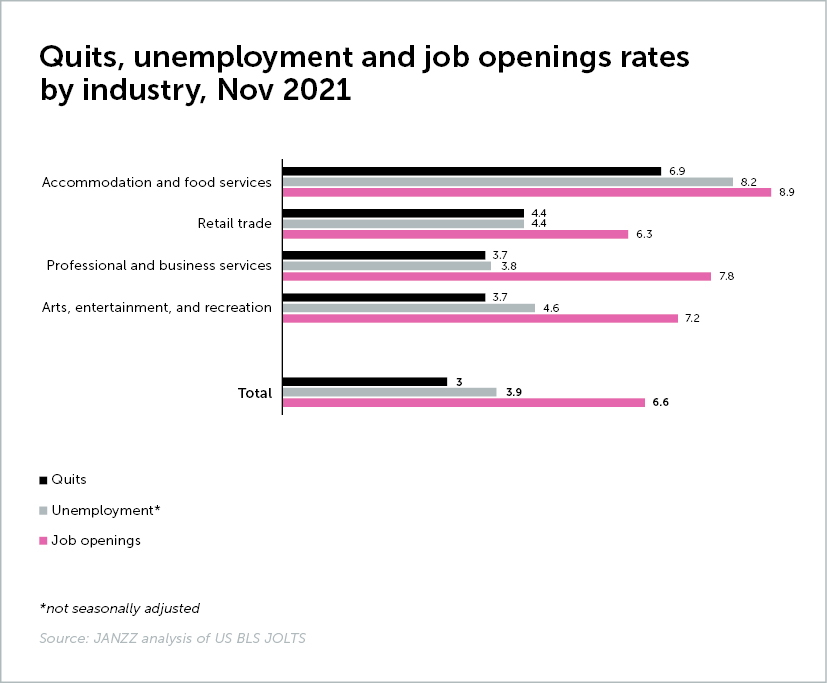 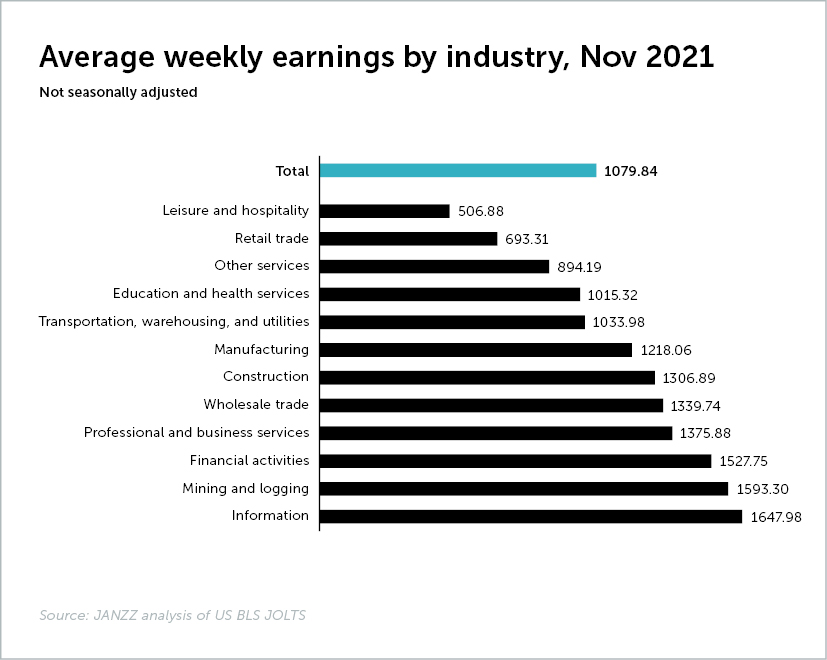 These low-wage workers are hardly quitting to indulge “pandemic-related epiphanies” or “craft careers”. Instead, they have been struggling to make a living since long before the pandemic. And now, with their industries among those with the highest net new job creation in 2021, these workers have a window of opportunity. If you have a job with no security, no appreciation and a salary that is barely enough to survive on, why not quit it for a job that pays $1 an hour more? Especially in a wage band that has experienced close to no growth in the past two decades. 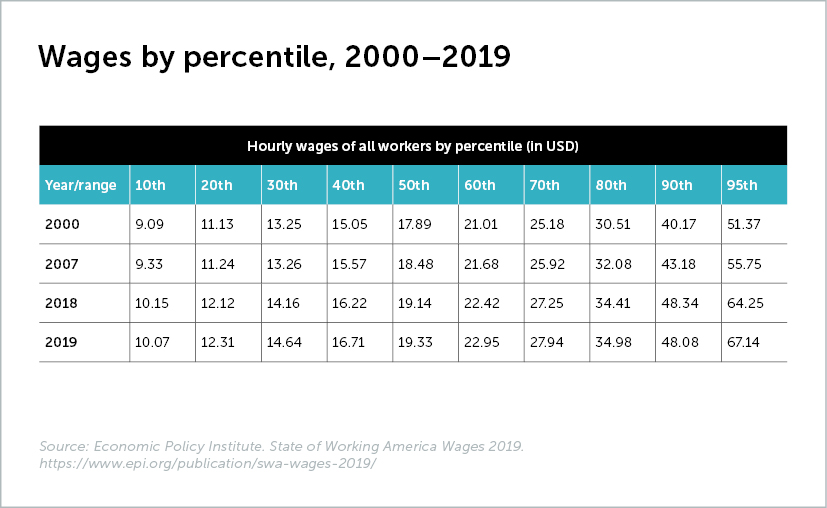 Despite these numbers, much of the news coverage and reports have focused on burnout and remote work as the main drivers of the Great Resignation, claiming that white-collar professionals are shifting their career paths and leaving their jobs for companies that offer work arrangements that better suit their newly found values and preferences. If at all based on data, the most often cited source is LinkedIn. But LinkedIn data is extremely biased towards white-collar professionals. If we take a look at the much more representative data from the Job Openings and Labor Turnover Surveys, we see that in the largest white-collar industry, professional and business services, quits have risen at less than half the rate for the leisure and hospitality industry – despite an above-average job openings rate. In finance, real estate or information, which includes software, internet and publishing companies, quits are not rising much at all. In other words, employees more likely to be working remotely and thus with an increased risk of (self-reported) burnout are in fact less likely to quit.

Another supposed factor is health concerns related to COVID-19. However, many of the workers with these concerns had already left the workforce in 2020. And although labor force participation rates are still below pre-pandemic levels, they have been increasing steadily since April 2020 for most groups – except for older Americans (unsurprisingly, as the pandemic poses a much higher health risk to older people). But instead of calling them ‘resignations’, these quits could also simply be called retirements. 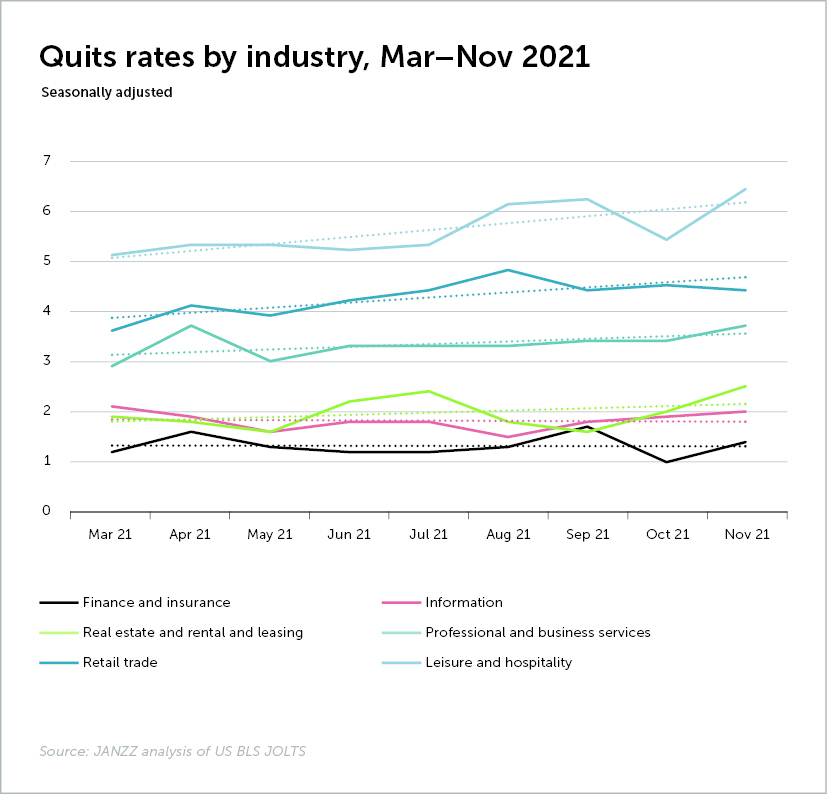 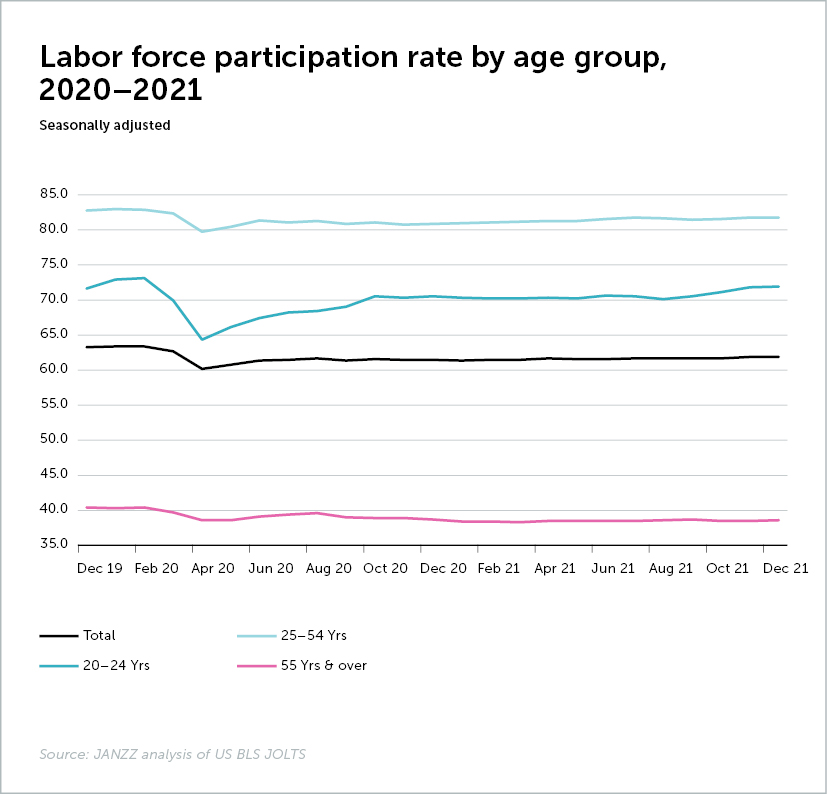 It is also worth noting that, while there is a lot of talk about the Great Resignation being a global phenomenon, it is in fact just talk. At first glance, the situation looks similar in the UK: a high quits rate coupled with a high level of vacancies and fast wage growth. And again, taking a closer look at the figures, resignations as a proportion of job moves are simply back to pre-pandemic levels, with low-skill/low-wage workers driving the surge in quits – presumably for similar reasons as in the US: painfully low wages, bad working conditions and disloyal employers. Rather than quitting for something new (as in rethinking careers), a higher proportion of workers are moving to new jobs in the same industry. Moreover, while there was a surge in wage growth in Q2 of 2021, this figure rapidly decreased back to the level of Q1 over the second half of 2021. 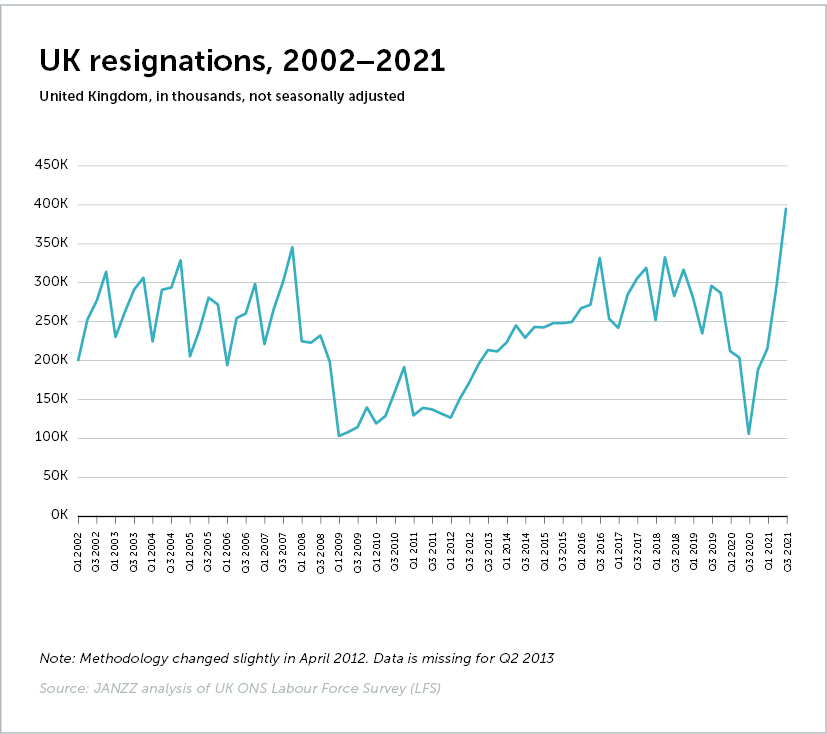 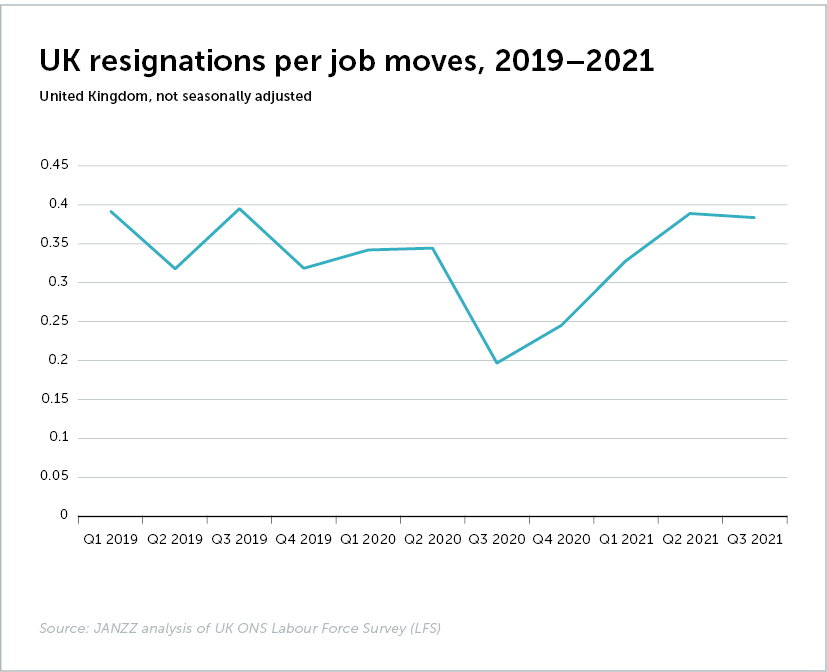 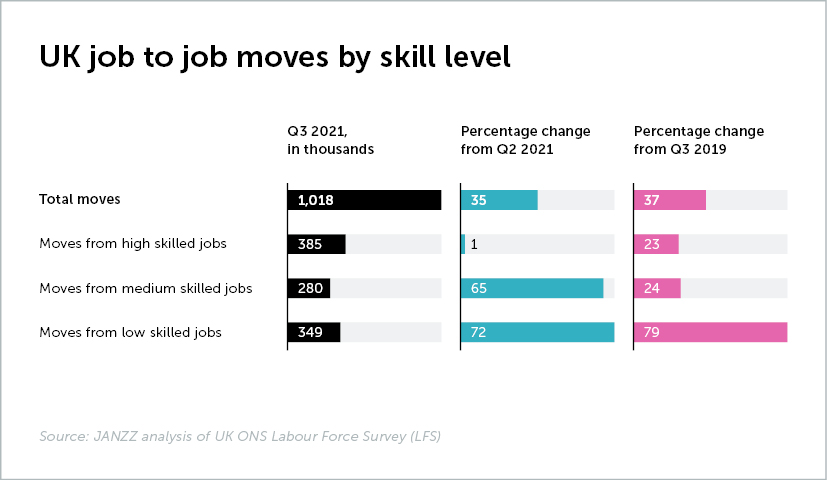 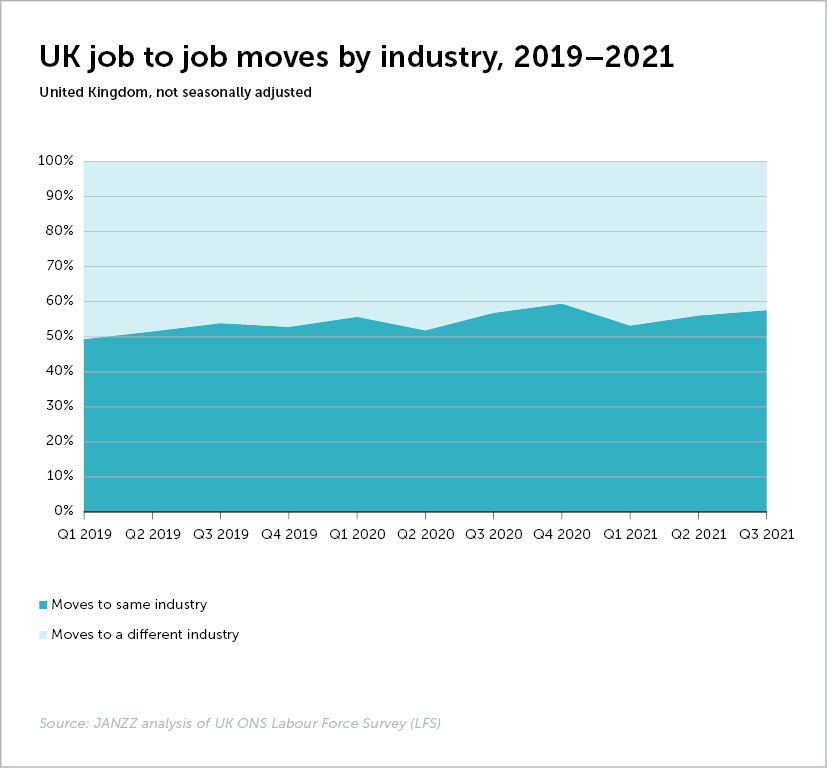 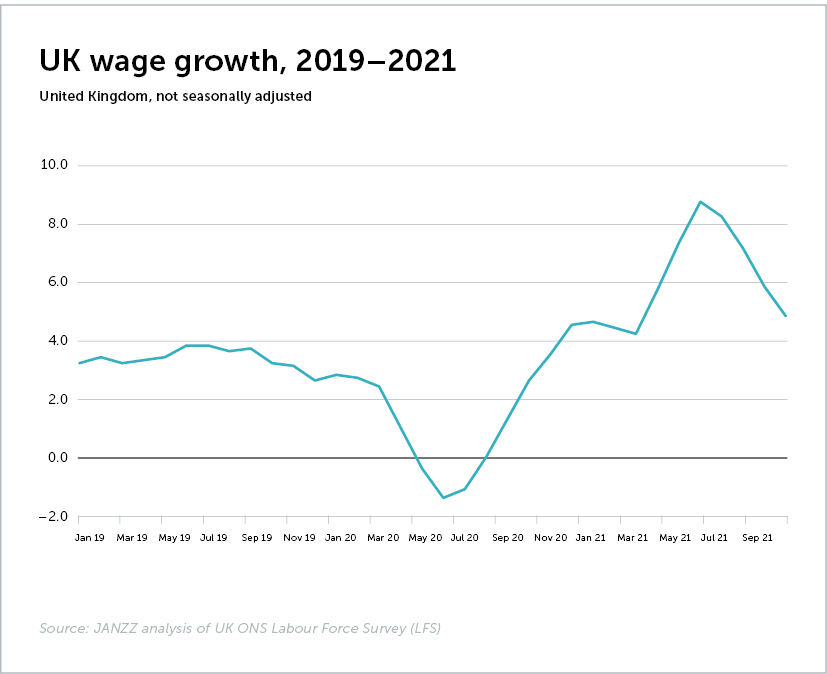 And the UK is the only other country with any kind of similarity. In Canada, the number of quits is still far below pre-pandemic levels – especially the number of people who left their job because they are dissatisfied. In Japan, the percentage of people who quit their job for this reason has remained comparable to the level in 2015.

In the EU, there is no comparable quits measure. But there is also no other measure that suggests a big rise in resignations. Wage growth across the EU is the lowest ever recorded and the labor force participation rate has returned to pre-pandemic levels, with rates in individual countries like Spain and France even exceeding those levels. According to the latest labor force survey conducted in Spain, the number of voluntary resignations in 2021 is still lower than before the pandemic. 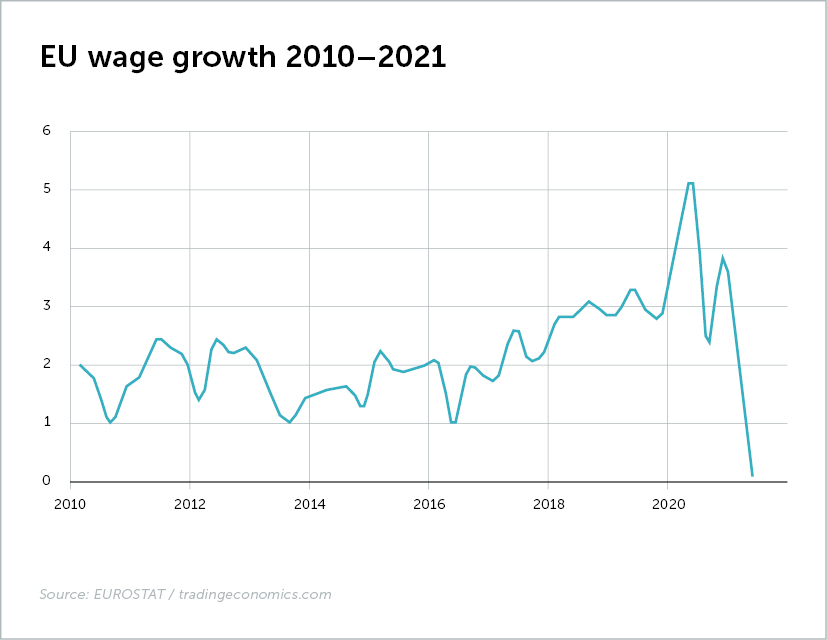 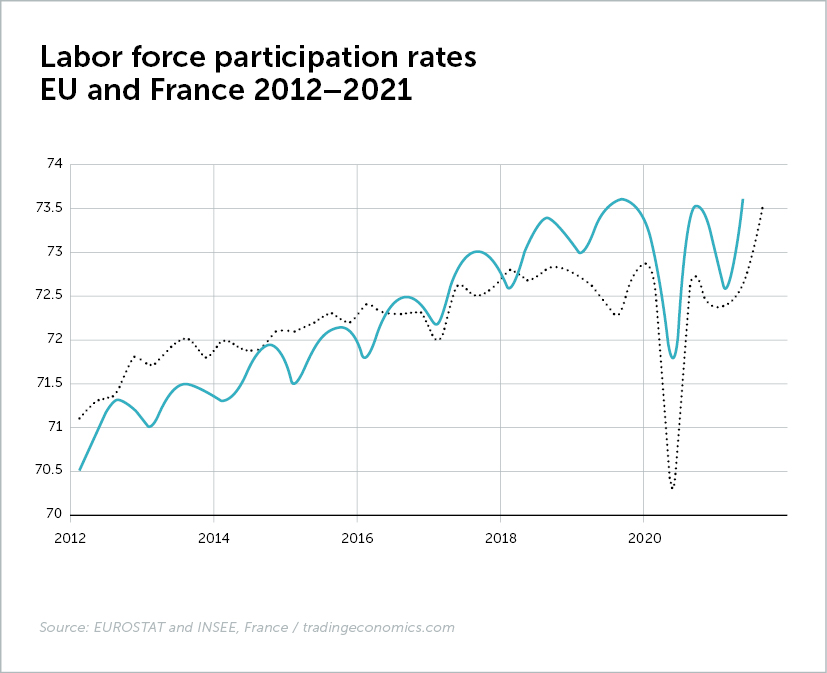 In Latin America and the Caribbean, the national economies are still reeling from the effects of the pandemic in terms of GDPs bottoming out and unemployment rates going through the roof. In most of these countries, the labor market is still far from recovery. The quality of available jobs has decreased, and the number of weekly hours of paid work is still significantly less than before the pandemic. According to the latest ILO report on Covid and the world of work, this is in fact true generally for low-income and lower-middle-income countries. 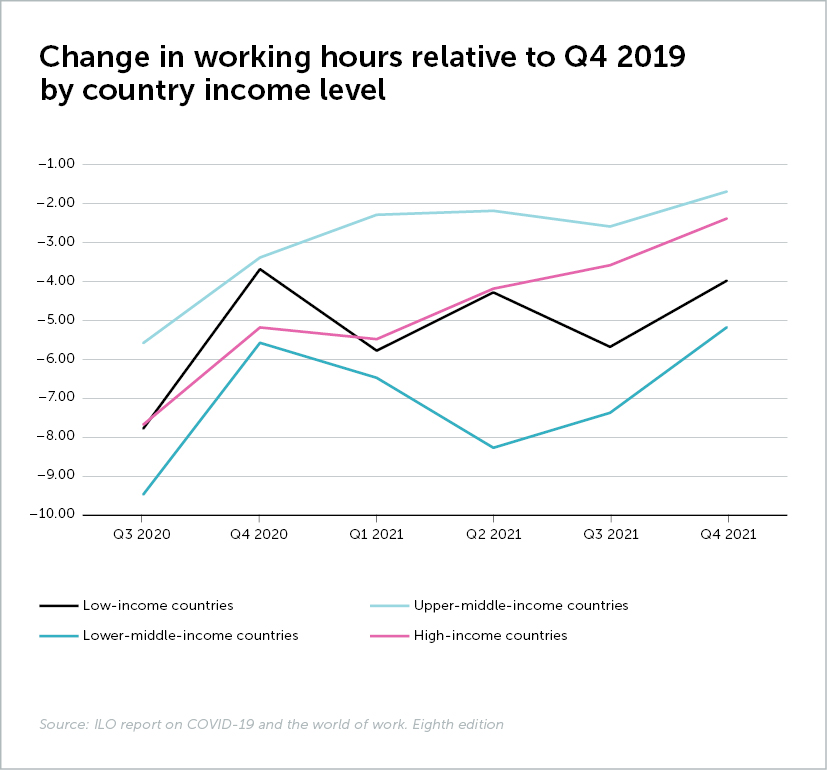 Unsurprisingly, the number of quits has not risen in these countries either. Overall, there is simply no evidence of a big rise in resignations anywhere in the world apart from the US and the UK. Let alone for the reasons promoted by the media.

Basically, if you take the time to look at the hard data, there is neither reason to panic, nor to celebrate this not-so-great resignation. For a truly great resignation in the sense conveyed by the media and self-marketing data providers, the majority of workers would need to be in the comfortable position of actually having a choice regarding their lifestyle and consumption needs, and the job that fits those needs. Currently, we are still very far from any such scenario.

What has happened in the US and UK is that low-wage workers who previously had to take whatever work they could get, now have some agency. After a long period of employers exploiting the fact that they had workers on tap and thus hiring on whatever terms they deemed fit, the tables have turned. Jobs paying minimum wage may have to change their pay and benefits to become more attractive. The question is how long it will last. And if it does last, will pay rises and perks be enough? Or will it require more profound changes and rethinking our attitudes to low-wage jobs as a society? More on this in our upcoming whitepaper.

‘So clever I don’t understand a word of what I am saying’... When it comes to the use of AI in HR, it is past high time
Scroll to top