The segregation of people in the workplace according to their biological sex is partly due to different preferences and aptitude for specific occupations. Traditionally, jobs with the highest concentration of women are to be found in teaching, nursing and other care-related service work. The majority of male workers, conversely, holds blue-collar jobs, for instance in construction, equipment operation or repairing. 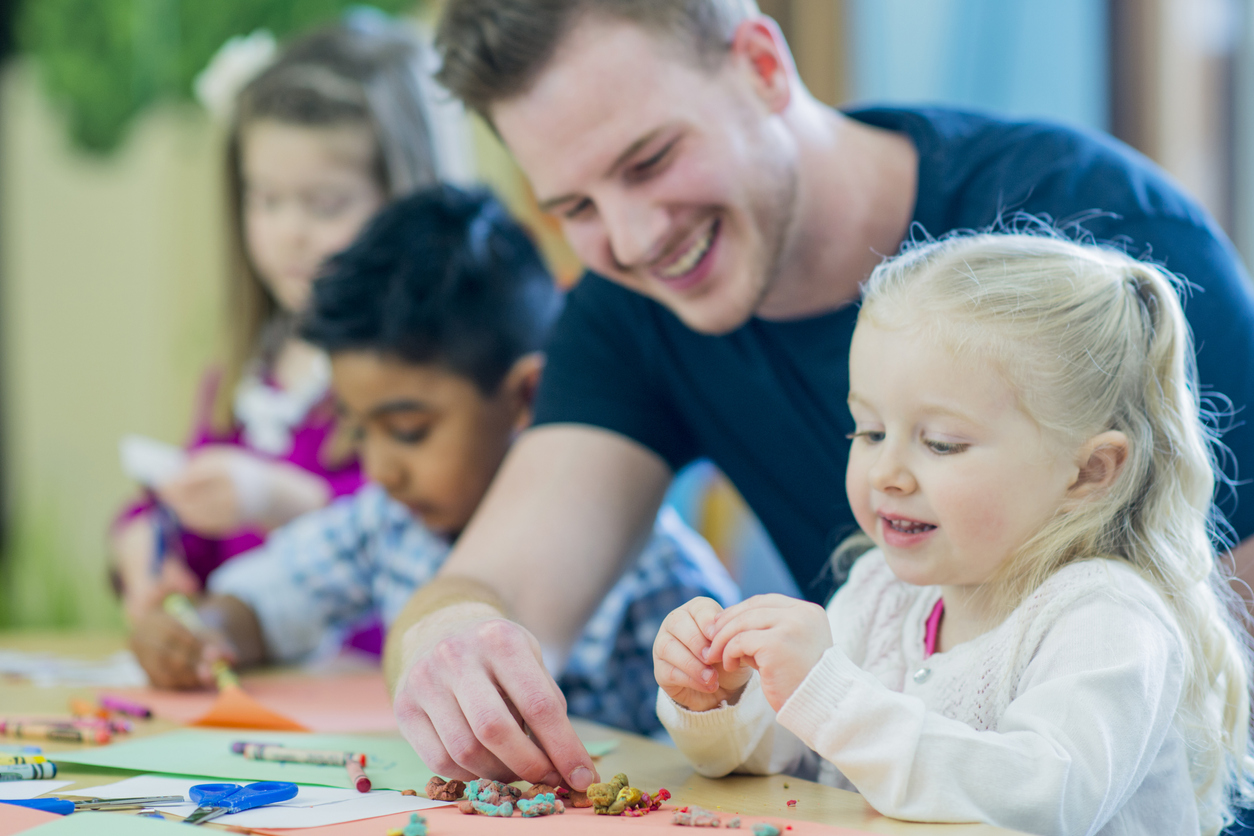 Furthermore, since occupation fields dominated by female workers have a lower compensation in comparison, it is more common for women to change into a profession that is male dominated than vice-versa. This is accompanied by recent developments such as the #MeToo movement and the introduction of women’s quota. However, this change is one-sided: occupations with a disproportional amount of men such as childcare remain largely unchanged.

In 1996, the European Commission Network on Childcare set the strategic goal to increase male employment in childcare to 20% by 2020. With a few months to go before the deadline, the employment rate of men in this domain is still far below the target number.

In Germany currently 6 in 100 pre-school childcare workers are male. In the UK and Ireland, the numbers are even lower than 2 out of 100. Norway, which is considered the global leader when it comes to gender equality, has the highest rate – with 9 in 100 men working in early childcare. This score is nevertheless far below the target of 20%. Outside of Europe the situation remains fairly unchanged. In the United States and Australia, the number of men working in early childcare amount to 4% and 2%, respectively.

Interestingly, things are quite different in a childcare center situated in Stuttgart, Germany. This center employs 12 people, half of which are male; moreover, it keeps receiving applications from more men. What is the secret of this center that appears to be so attractive for male childcare workers?

Mr. Nöth, the center’s founder and a former childcare worker explains that, unlike in traditional childcare centers with fixed groups, in his center children are presented with seven different activity groups, including ones for painting, handcraft and gymnastics. Each group activity takes place in a separate, specially equipped room and the children can attend a different group every day. Nöth notes that this way of operating offers opportunities for the childcare employees to work creatively, which includes individually designing and developing the activities. Such liberties, in turn, are said to be highly valued by many men. [1]

Gender stereotyping in the workplace like the one pertaining to men in early childcare is still present and it can create a hostile environment for male employees. In addition, work life can also be isolating when most co-workers are female. If there is little camaraderie and social activities among male coworkers, this might impel the few men to quit. At least, this is suggested by the fact that several of the male childcare workers from the Stuttgart center report to feel more comfortable among the relatively high number of male coworkers.

Such special cases can give important indications for changing the workplace situation where sex segregation poses a significant challenge. One point is concerned with creating new functions for roles that are dominated by one particular sex.

This is already happening in some blue-collar professions. With the advent of new technologies some of the jobs are shifting their focus from intense physical tasks towards sophisticated machine-involving activities. This in turn attracts an increasing number of women to the field.

Another point involves the achievement of gender balance in the workplace. If one sex is in the minority it is likelier to have unpleasant experiences at work. Statistics indicate that for women such unpleasantness increases tremendously in occupations with over 90% male employees.

In Norway, the education system actively directs men towards certain teacher colleges in order to prevent unbalanced concentration. This way, it encourages more men to apply and contributes to higher shares of male workers in early childcare. [2]

For almost a decade, JANZZ.technology has been observing and working with many labor markets worldwide. Our unique matching solution only uses parameters that truly matter for job matching. This includes functions, skills, specialization, experience etc. but avoids biases with regard to age, gender or origin. To learn more about our solutions please write now to sales@janzz.technology