JANZZ Mindsetter is about critical mindsets. It offers space for critical voices to offer insights into HR, recruiting, digital transformation, labor market issues such as gender and minority discrimination and many more topical issues.

Dr. Wen Hua has rich experience in research and international development in the field of gender. She obtained the M.Phil. Degree in Social Anthropology at University of Bergen of Norway in 2005 and received the Ph.D. in Anthropology at the Chinese University of Hong Kong in 2010. She was a visiting fellow of Gender Research Programme at Utrecht University of Netherlands in 2007. She has published several papers on gender issues in English and Chinese journals. She is the author of Buying Beauty: Cosmetic surgery in China, published by Hong Kong University Press 2013. 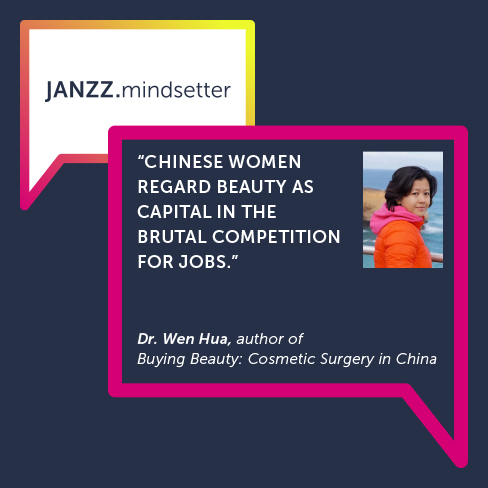 Why do more and more Chinese women undergo cosmetic surgeries despite a plethora of reports on the possible side effects?

Since the reforms in the early 1980s, Chinas has been one of the fastest growing economies in the world. The uncertainty and instability created by the drastic and dramatic economic, socio-cultural and political changes in China have produced immense anxiety that is experienced by women both mentally and corporeally. The economic reform has resulted in fierce competition in the job market and produced much pressure on young women to get an edge to stand out in the fierce job market. Meanwhile, despite dramatic social changes, some traditional gender norms that prize women’s beauty over ability remain remarkably unchanged, which leads people to value women’s physical appearance in the workplace. The rapid social transitions lead people to grasp every opportunity presented, and cosmetic surgery is therefore viewed by some women as an investment to gain “beauty capital” for one’s future life in a rapidly changing and fiercely competitive society.

How does beauty matter in job recruitment in China?

In my book, I argues that some women view “Being good-looking is capital,” that is, an attractive appearance as a set of tangible and portable personal assets that are convertible into financial or social capital that can give them an edge in the fierce job market, where occupational segregation of female labor in the service industry and employment discrimination based on gender, appearance, height and age widely exist. In the past decade, it was not unusual that we saw that besides education background and work experience, job advertisements specified gender, age, marriage status, and even height and appearance such as “above-average looking,” “good-looking,” or “height over 1.65 meters.” Female job applicants, especially young graduates who already have fewer opportunities than their male counterparts, have to face more prejudice and discrimination based on appearance during their job-hunting. Within these fewer opportunities, when age and appearance matter, it is not surprising why some Chinese women regard beauty as a capital in the brutal competition for jobs.

What could be done in order to reduce the pressure on graduates to undergo cosmetic surgery?

Over the years, I saw that job advertisements, which require specific gender, age, marriage status, height and physical appearance, are less and less to be seen openly in job adverts. But I think that discrimination in employment still exists in China’s workplace. The discrimination has changed from overt to recessive, while the situation might be even worse because hidden prejudice and discrimination against women is harder to avoid and punish. According to the Third Survey of Chinese Women’s Social Status in 2010, more than 72 percent of women had a perception of “not being hired or promoted because of gender” discrimination. I think that to safeguard women’s rights and interests, the authorities should put more effort and effectively punish gender discrimination in employment, which can also reduce the pressure of graduates to undergo cosmetic surgery.

The World Economic Forum on the Future of Jobs JANZZ Mindsetter – Interview with Dr. Chia-Jung Tsay
Scroll to top