You are here: Europe / Our Expertise / Hosting more edu...

The pandemic has caused massive damage to many countries, but some may have also recognized the opportunities it presents. With low coronavirus infection rates, beautiful scenery and a relatively low cost of living, Greece is becoming an ideal destination for remote workers, especially digital nomads. Last November, the Greek government announced a 50 percent income tax cut for “digital migrants” for the first seven years when they immigrate in 2021. This is also an attempt by the government to attract Greeks who emigrated during the long economic decline following the 2008 financial crisis.

According to an article published by the Migration Policy Institute, there were two important waves of mass emigration in the history of modern Greece, the period between the late 19th and early 20th century. The first emigration wave was encouraged by the Greek authorities, who considered remittances as a means to improve the balance of payments of the economy.

During the second wave, Greek emigrants, most of whom came from rural areas, became the main labor force in the industrialized nations of northern Europe. Due to the restrictive immigration policies of the receiving countries and other factors, almost half of the second-wave emigrants later returned to Greece.

Regarded by many as the third wave of Greek emigration, the last outflow took place after the 2008 financial crisis. Some unique characteristics distinguish the third wave from the previous ones. According to a research paper titled Greece’s new Emigration at times of Crisis, more than two out of three of the post-financial-crisis emigrants are university graduates. A further finding is that individuals with postgraduate degrees or degrees from the medical and polytechnic fields account for a quarter of the total outflow. 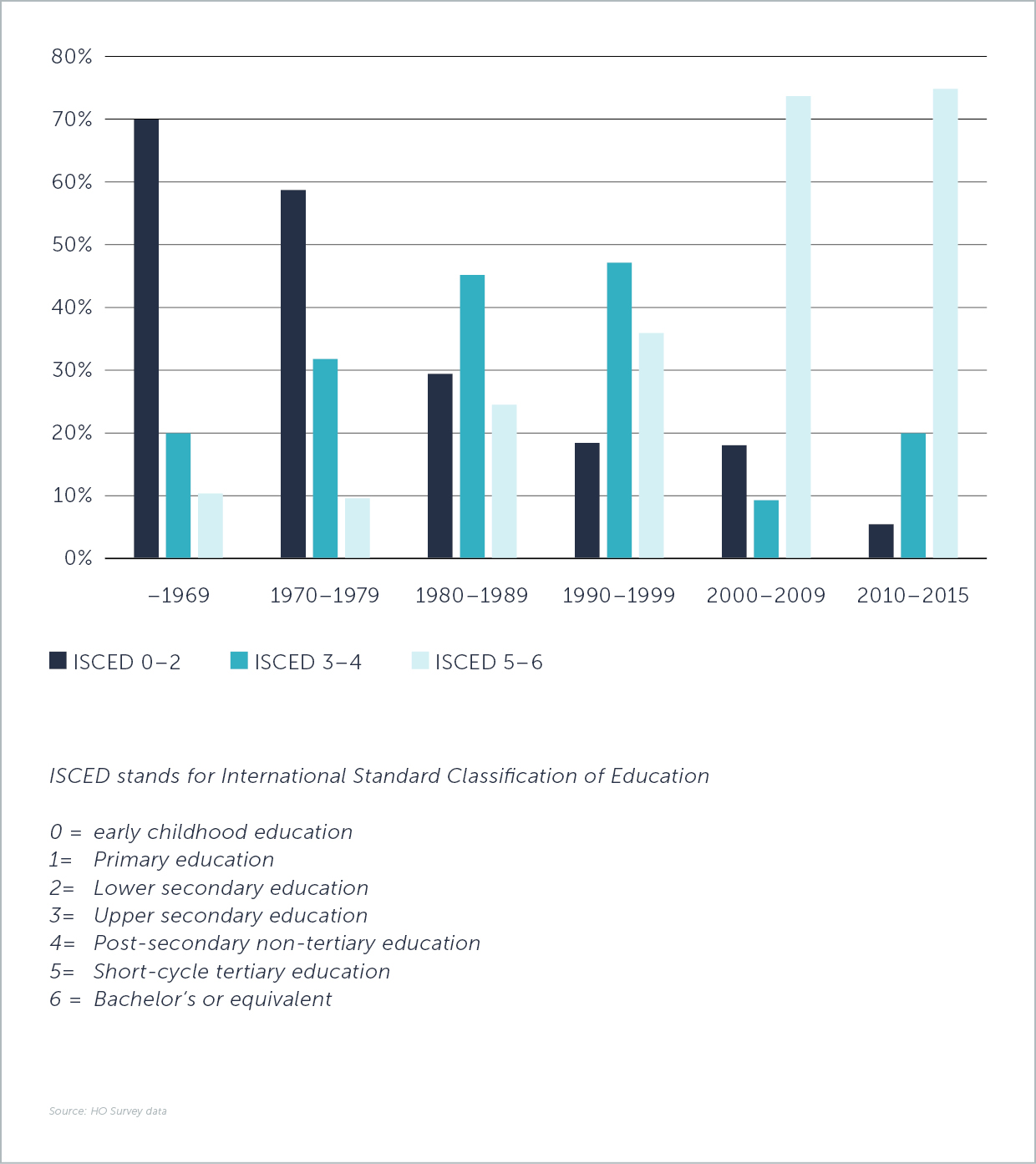 Looking at the economic background of emigrants, the paper reveals that those emigrating in the wave following the 2008 financial crisis were most likely to come from very high-income households. Thus, to a large extent, it can be interpreted as a matter of choice that the middle and upper social classes decide to “send” emigrants abroad. In addition, the majority of migrants did not send money back and thus did not send remittances.

Talent outflow beyond the economic crisis

On closer inspection, there are other underlying reasons besides the economic crisis why so many young and talented Greeks have left their home country. Following a trend toward the expansion of tertiary education that had been taking place in Europe since the 1970s, Greece pushed ahead with the opening of higher education in the second half of the 1980s [1].

The result of the opening of tertiary education was relatively high unemployment, as young graduates were not offered enough job opportunities. A high proportion of long-term unemployment, underemployment, and employment in unrelated occupations was the case for cohorts born from the 1970s onward.

In the 1990s, this problem became apparent as the overall unemployment rate had risen to 11.3 percent in that decade [2]. The public sector was the main place to absorb graduates. According to the Reviews of national policies for education: Greece published by the OECD, after the expansion of universities in the mid-1980s, ten years later almost 75 percent of graduates were employed in the public sector. During the 1990s, it has as well become increasingly difficult to find jobs in the public sectors.

As outlined in the research paper Greece’s new Emigration at times of Crisis, the mismatch between supply and demand of graduates and, in particular, the limited demand for private-sector occupations due to low value-added products and services were the deeper reasons for the outflow of talent and professionals in Greece.

For some time now, supporting business development, strengthening entrepreneurship and improving business innovation capabilities have been top priorities for the Greek government in order to increase productivity and create jobs in Greece, especially in the private sector. Recently, some major technology investments were announced in the country, along with the strategy to attract digital workforce. This demonstrates Greece’s determination to improve its technological and innovative footprint. But does Greece have what it takes to succeed?

Greece’s position in education is relatively strong, with about around 45% of the population aged 25-34 having a tertiary education, which is about average compared to other EU countries. Greece also has a deep and rich tradition in science and mathematics. It has a high proportion of STEM graduates, for example, according to 2017 OECD data, Greece has the highest proportion of graduates in science, mathematics and statistics among all countries, and also a relatively high proportion of graduates in information and communication technology.

On the entrepreneurial side, the vast majority of companies in Greece are small to medium-sized, with limited access to banks, to capital markets, no venture capital and weak business planning. To improve the competitiveness of their businesses and encourage them to engage in quality entrepreneurship with innovation and value-added products and services, national measures including public funding have been taken. In 2012, the Greek government allocated 50 million euros to four small venture capital funds that invested 73 million euros in 63 startups. In 2017, 6 similar funds were financed by an entity established by the EU European Investment Fund and the Greek government. A total of 210 million euros is expected to be allocated by 2023 [3].

People still doubt whether the Greek tech industry can attract enough private capital to stabilize growth. However, the pandemic has just made investors believe in the future of remote working/hiring and Greece’s potential to attract educated expatriates back home as well as international digital workers. According to a recent crunch article, the Greek venture capital market will continue to grow with the return of the diaspora from major Western cities.

This is another article from our series of JANZZ In-depth Global Labor Market Insights. In case you missed our previous post on this topic, feel free to check it out here: China’s rural revitalization strategy pushes to expand vocational education. JANZZ.technology has been observing and working with different labor markets around the globe. If you are interested in reading about any labor markets, please let us know and it might be our next topic. Stay tuned.

Would you like to read the article in greek?