Like rural areas in many countries, China’s rural society is experiencing recession in various fields due to lack of economic opportunities, population reduction, aging and other reasons. Aiming at solving the serious rural issues, in 2017 China proposed the implementation of rural revitalization strategy called by the Chinese President Xi as a strategy that would have a fundamental impact on the nation. In April 2021, a law on the promotion of rural revitalization was adopted to reinforce the strategy.

Under the strategy, highly skilled technical talents such as agricultural technicians and craftsmen will be greatly sought after. Hence, a rising importance attached to vocational education can be observed in the country. In February 2019, an implementation plan on national vocational education reform was published by the Chinese State Council aiming to raise the status of vocational education by changing the entire vocational education framework, including assessment and evaluation mechanisms, teacher training and recruitment, occupational standards and industry engagement.

What worth noticing of the plan is a pilot that aiming to transform selected universities into “Universities of Applied Sciences”. Students from such universities will acquire both a university diploma and certificate of vocational skills, a mechanism called the “1+X” model. Since the plan, 27 universities have been selected to test the model. In March 2021, a new catalog of vocational majors has been released, and among the 1,349 majors listed, 247 are for the “1+X” model (undergraduate majors).

A recap of vocational education in China

In the 1950s, China began its industrialization. To quickly fill the skill gap, the state focused on secondary vocational education, which has a short training cycle and a more practical approach. For the first time, several secondary vocational education schools have been funded covering the areas of geology, mining, electrical and mechanical, engineering and railroad transportation. [1]

In 1958, apprenticeships first appeared in a factory in Tianjin where workers could follow a half-day work-and-half-day-study model which was widely adopted later. Till 1965, vocational training was still popular among students with more than 50% of the total number of high-school students. 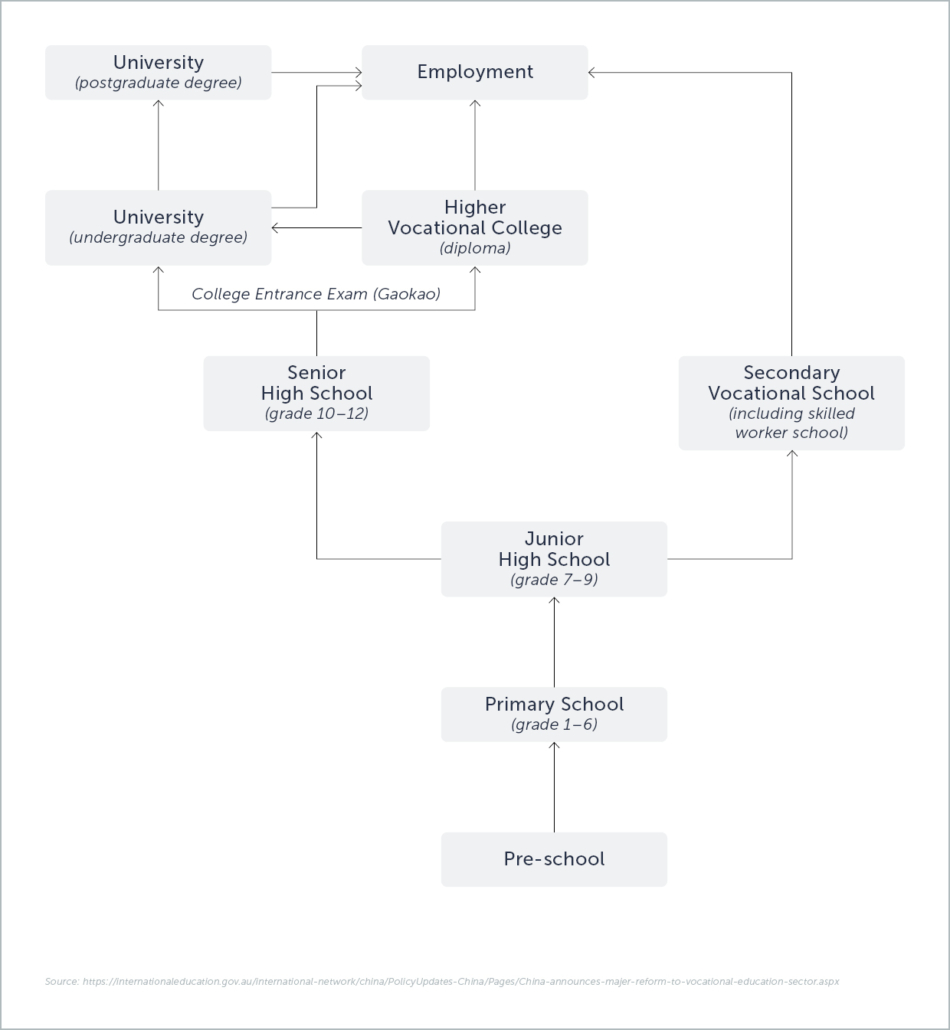 According to Liu Yuzhao, a professor from Shanghai University, structural mismatching between skills supply and demand, prejudice toward vocational education and others are still waiting to be solved.  After joining World Trade Organization in 2001, Chinese industrial manufacturing enterprises have developed on a large scale, craving for graduates with manufacturing skills which are normally acquired from vocational training, however, the shrinking of vocational education due to the expansion of university as mentioned above caused a shortage of supply of skills needed. The state reacted shortly afterward with increased investment in state-owned vocational schools. Despite growing student numbers, the action caused a decrease of vocational education financed by corporations and the private sector. As a result, students were not able to learn on-site which has worsened the mismatching between skills supply and demand.

Professor Liu pointed out that a lack of recognition of skill qualifications is another issue. Many state-recognized professional certificates have low value on the job market and to obtain certain certificates, requires the holding of a high-school diploma, all of which become obstacles for workers when trying to acquire such certificates. Without skill recognition, it makes it harder for employers to compare job applicants, on the other side, job applicants lose their bargaining power when it comes to salary. He further noted, to ensure the adoption of professional certificates is an easy task, but what is missing is a system that could guide companies and workers in skills development.

For a long time, the prejudice of “inferiority” has largely restricted students from taking on vocational education, as it is regarded as the last choice compared to an academic degree. Time will be needed for the parents especially the society to acknowledge vocational education, but China is on the right track.

This is another article from our series of JANZZ In-depth Global Labor Market Insights. If you missed our previous one on this topic, please check out More quality jobs are needed for female part-timers. JANZZ.technology has been observing and working with different labor markets around the globe. If you are interested in reading about any labor markets, please let us know and it might be our next topic. Stay tuned.