Do you know how to build a house? If not, maybe you should consider learning it right now. In 2030 there is a high chance that we will have a critical shortage of construction workers. This is your opportunity to pick up the skills such as installing electrical wiring, carpentry, blockwork, waterproofing and plumbing.

According to the 2020 report by the Schweizerischer Baumeisterverband (Swiss Building Association)[1], the Swiss construction industry is facing massive problems: fewer and fewer young people are willing to learn a trade in construction, and many of the current skilled workers are about to retire. Compared to 2010, 40% less young people started a bricklayer apprenticeship in 2019. This will have a critical impact on the entire industry because the majority of construction foremen, supervisors, and construction managers are recruited from the bricklayer pool. On the other hand, the proportion of people aged over 50 in the main construction industry is up to 36%. The expected outcome of this combination is alarming.

In recent years, the level of professional qualifications on construction sites has risen sharply due to digitalization, leaving the typical unskilled worker now barely in demand and creating a skill gap between supply and demand of workforce in this sector. However, the drivers of skills shortages are much more complex. 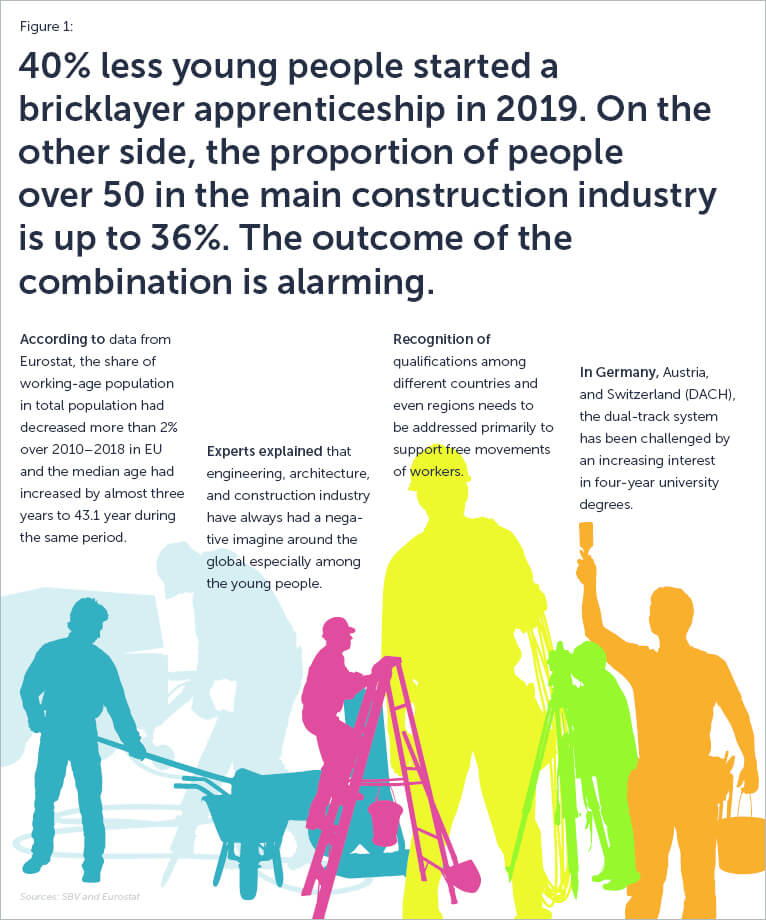 Lower birth rates and increasing life expectancy are the two key demographic trends in Switzerland and the European Union. An ageing population paired with a shrinking working-age population have intensified the situation in the labor market. According to data from Eurostat [2], the share of working-age population in the total EU population decreased by more than 2% from 2010 to 2018 and the median age increased by almost three years to 43.1 during the same period. 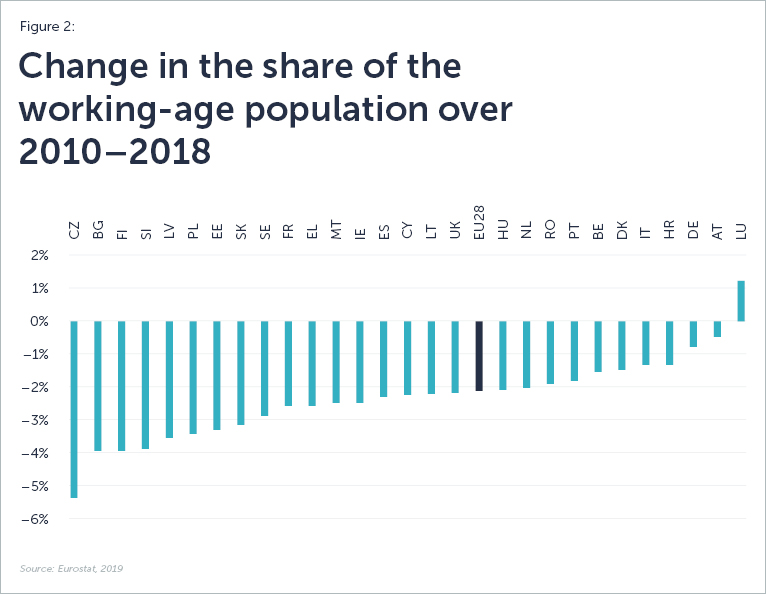 On top of this, the impact of baby boomers heading into retirement has yet to fully unfold. A study by Credit Suisse [3] states that a total number of around 1.1m people will reach retirement age in the next ten years and the younger generation will not be able to fill the vast number of highly skilled jobs vacated by this post-war baby boom generation. Studies from other Central European countries reveal similar expectancies concerning the impact of baby boomers on their labor markets.

However, multiple reports have indicated a shortage of skilled workers in the construction sector for countries that do not have this demographic shape, such as South Africa and India. Apparently, a more general factor is causing the skill shortage in construction on an international level.

Many studies from around the globe show that the construction industry has a negative image, especially among the youth. For instance, in a study conducted in a high school by the national business employment weekly in South Africa, careers in construction came in at number 247 out of 250 potentially attractive career options [4]. CITB data in 2013 [5] found that in the UK, the overall appeal of the construction industry as a career option had fallen to only 4.2 out of 10 among adolescents aged 14 to 19, and the Union of Construction, Allied Trades and Technicians (UCATT) also reported a 14.6% fall in construction apprenticeship numbers in 2013. This was confirmed again in a 2017 poll. In the US, only 3% of youth aged 18-25 wanted to work in the construction trades in a 2017 survey [6]. 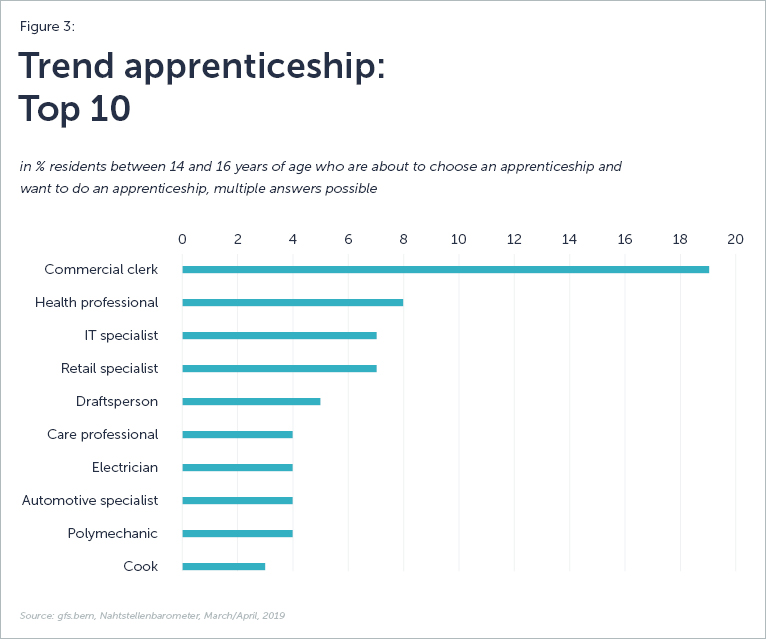 Despite the bright prospects of a career in an in-demand field, the youth just can’t seem to get past the industry’s bad image: low wages and job security, health and safety concerns, low-quality work, and tough working conditions are the aspects that the youth most associate with jobs in construction and deter them from pursuing a career in this sector. Moreover, the rise of digitalization feeds a false fear that jobs in construction will fall victim to automation in the future.

Indeed, some occupations in construction have a higher potential for automation, but technically, it is not feasible to perform certain tasks with robots. Even physical work, which many assume most likely to be automated, can be too challenging for robots – especially physical tasks in unpredictable and changing environments.

Moreover, when referring to professions in construction, people mostly think only of on-site activities, often overlooking the professions related to sub-sectors such as real estate, procurement, architectural or engineering activities, which enjoy a higher social status and could be very attractive to both genders.

In the dual education system practiced most notably in Germany, Austria, and Switzerland (DACH), most career paths in the construction sector start with vocational training and apprenticeship. A long-standing tradition in these countries, the dual system was well received by parents, adolescents, and society at large. Lately, an increasing interest in university degrees has posed a direct challenge for the professions in the construction sector and for other skilled trades.

By the time university graduates are faced with making a career choice, it is far too late to attract them to the construction site. Research shows that timing is key for sparking interest in construction professions, and the highest success rates are reported when engaging school children at the primary level. Accomplishing this will require joint efforts to bring about fundamental changes to the education system and foster deeper collaboration between industry and educational institutions.

This is certainly a promising strategy for the long term and future workforce generations. In the short and midterm, however, national economies – particularly in industrialized and industrializing countries – will highly depend on flows of skilled workers among countries all over the world to alleviate the workforce shortages. Indeed, as noted by the ILO [7], migrants are a vital source of skills and labor for industries such as construction. By nature, construction requires flexible teams with a variety of skills, and is thus often deeply dependent upon migrant workers due to their mobility and flexibility. Therefore, solutions contributing to the free movement of persons will rapidly grow in demand. However, to ensure true free movement of workers, an important issue needs to be addressed from the start: the recognition of qualifications among different countries and even regions.

In the EU, the Professional Qualifications Directive (PQD), the European Qualifications Framework (EQF), and the European Credit System for Vocational Education and Training (ECVET) serve as the main instruments for the recognition of professional and academic qualifications to support workers’ mobility across Europe. However, despite significant efforts such as the launch of the European Skills, Competences, Qualifications and Occupations (ESCO) classification system, skills recognition and matching among the member countries are still very disappointing, not to mention internationally. Comparing skills across borders poses two significant challenges: first, many countries have their own classification systems or taxonomies, which each need to be mapped into a transnational system. But not all have already effectuated this. Second, not all skills and qualifications translate easily. For instance, a carpenter who completed an 18-month apprenticeship in the UK will have a different skill set than a carpenter with a three-year apprenticeship in Austria, even though both completed standardized training for the same skilled trade.

For this reason, more and more investments and expectations are placed on ontologies and semantic technologies as the solution to overcome these challenges. Currently, JANZZ’s ontology is the largest multilingual encyclopedic knowledge representation in the field of occupation data. Not only can it translate the many linguistic variations in occupational jargon into a common vocabulary, but more powerfully, by human expert curating, it can truly compare differences and similarities in education and qualifications across borders and language divides – thus delivering a meaningful contribution towards true free movement of skilled workers.

Contact us now to understand how JANZZ’s ontology can assist you in education and qualification recognition for your workforce.

[5] UK Construction: An Economic Analysis of the Sector (July 2013)